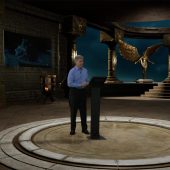 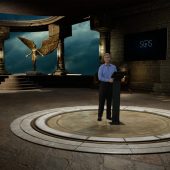 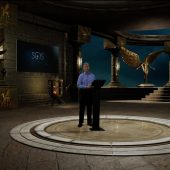 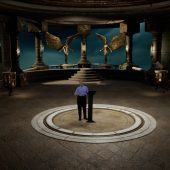 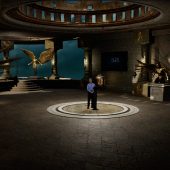 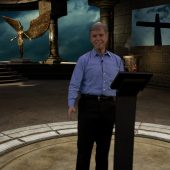 Chapter Seventeen: There is the Judge of the Living and Dead, the Lamb

Declaring the end from the beginning, The Word of God

2 Peter 1:16-19 (NASB)
16 For we did not follow cleverly devised tales when we made known to you the power and coming of our Lord Jesus Christ, but we were eyewitnesses of His majesty.
17 For when He received honor and glory from God the Father, such an utterance as this was made to Him by the Majestic Glory, "This is My beloved Son with whom I am well-pleased"—
18 and we ourselves heard this utterance made from heaven when we were with Him on the holy mountain.
19 So we have the prophetic word made more sure, to which you do well to pay attention as to a lamp shining in a dark place, until the day dawns and the morning star arises in your hearts.

When you see Aurora arise (morning star) you know that the day is about to come! We are to have the morning star in our hearts!!!! Knowing His appearing is imminent!

Hebrews 9:27-28 (NASB)
27 And in as much as it is appointed for men to die once and after this comes judgment,
28 so Christ also, having been offered once to bear the sins of many, will appear a second time for salvation without reference to sin, to those who eagerly await Him.

Isaiah 7:14 (NASB95) Virgin Birth
14 “Therefore the Lord Himself will give you a sign: Behold, a virgin will be with child and bear a son, and she will call His name Immanuel.

Micah 5:2 (NASB95) Born in Bethlehem
2 “But as for you, Bethlehem Ephrathah, Too little to be among the clans of Judah, From you One will go forth for Me to be ruler in Israel. His goings forth are from long ago, From the days of eternity.”

Psalm 78:1–2 (NASB95) Taught in Parables
1 Listen, O my people, to my instruction; Incline your ears to the words of my mouth.
2 I will open my mouth in a parable; I will utter dark sayings of old,

Isaiah 29:18 (NASB95) Healed the sick
18 On that day the deaf will hear words of a book, And out of their gloom and darkness the eyes of the blind will see.

Isaiah 35:4–6 (NASB95) Healed the sick
4 Say to those with anxious heart, “Take courage, fear not. Behold, your God will come with vengeance; The recompense of God will come, But He will save you.” 5 Then the eyes of the blind will be opened And the ears of the deaf will be unstopped.  6 Then the lame will leap like a deer, And the tongue of the mute will shout for joy. For waters will break forth in the wilderness And streams in the Arabah.

Isaiah 42:6–7 (NASB95) Healed the sick
6 “I am the Lord, I have called You in righteousness, I will also hold You by the hand and watch over You, And I will appoint You as a covenant to the people, As a light to the nations, 7 To open blind eyes, To bring out prisoners from the dungeon And those who dwell in darkness from the prison.

Zechariah 9:9 (NASB95) He entered Jerusalem on a donkey
9 Rejoice greatly, O daughter of Zion! Shout in triumph, O daughter of Jerusalem! Behold, your king is coming to you; He is just and endowed with salvation, Humble, and mounted on a donkey, Even on a colt, the foal of a donkey.

Isaiah 50:5–6 (NASB95) Flogged and abused
5 The Lord God has opened My ear; And I was not disobedient Nor did I turn back.
6 I gave My back to those who strike Me, And My cheeks to those who pluck out the beard; I did not cover My face from humiliation and spitting.

Psalm 22:16 (NASB95) Hands and feet were pierced
16 For dogs have surrounded me; A band of evildoers has encompassed me; They pierced my hands and my feet.

Psalm 22:18 (NASB95) His garment were divided
18 They divide my garments among them, And for my clothing they cast lots.

Isaiah 53:8–9 (NASB95) He was killed and buried
8 By oppression and judgment He was taken away; And as for His generation, who considered That He was cut off out of the land of the living For the transgression of my people, to whom the stroke was due? 9 His grave was assigned with wicked men, Yet He was with a rich man in His death, Because He had done no violence, Nor was there any deceit in His mouth.

Hosea 6:2–3 (NASB95) rose on the third day (dual, near and far)
2 “He will revive us after two days; He will raise us up on the third day, That we may live before Him. 3 “So let us know, let us press on to know the Lord. His going forth is as certain as the dawn; And He will come to us like the rain, Like the spring rain watering the earth.”

Plus one of the greatest miracle in some of our own life time!

All that the prophets of old spoke concerning Israel that have been literally fulfilled in history but I will only point out one that we are witnesses.

Isaiah 43:5-7 (NASB) Israel’s rebirth
5 "Do not fear, for I am with you; I will bring your offspring from the east, And gather you from the west. 6 "I will say to the north, 'Give them up!' And to the south, 'Do not hold them back.' Bring My sons from afar And My daughters from the ends of the earth, 7 Everyone who is called by My name, And whom I have created for My glory, Whom I have formed, even whom I have made.”

Isaiah 66:8 (NASB) May 14, 1948
8 "Who has heard such a thing? Who has seen such things? Can a land be born in one day? Can a nation be brought forth all at once? As soon as Zion travailed, she also brought forth her sons.

Jeremiah 30:3-4 (NASB)
3 'For behold, days are coming,' declares the LORD, 'when I will restore the fortunes of My people Israel and Judah.' The LORD says, 'I will also bring them back to the land that I gave to their forefathers and they shall possess it.'"
4 Now these are the words which the LORD spoke concerning Israel and concerning Judah:

1 Corinthians 15:1–8 (NASB95)
1 Now I make known to you, brethren, the gospel which I preached to you, which also you received, in which also you stand,
2 by which also you are saved, if you hold fast the word which I preached to you, unless you believed in vain.
3 For I delivered to you as of first importance what I also received, that Christ died for our sins according to the Scriptures,
4 and that He was buried, and that He was raised on the third day according to the Scriptures,
5 and that He appeared to Cephas, then to the twelve.
6 After that He appeared to more than five hundred brethren at one time, most of whom remain until now, but some have fallen asleep;
7 then He appeared to James, then to all the apostles;
8 and last of all, as to one untimely born, He appeared to me also.

Psalm 12:6 (NASB95)
6 The words of the Lord are pure words; As silver tried in a furnace on the earth, refined seven times.

2 Timothy 3:15-17 (NASB95)
15 and that from childhood you have known the sacred writings which are able to give you the wisdom that leads to salvation through faith which is in Christ Jesus.
16 All Scripture is inspired by God and profitable for teaching, for reproof, for correction, for training in righteousness;
17 so that the man of God may be adequate, equipped for every good work.

John 14:16–24 (NASB95)
16 “I will ask the Father, and He will give you another Helper, that He may be with you forever;
17 that is the Spirit of truth, whom the world cannot receive, because it does not see Him or know Him, but you know Him because He abides with you and will be in you.
18 “I will not leave you as orphans; I will come to you.
19 “After a little while the world will no longer see Me, but you will see Me; because I live, you will live also.
20 “In that day you will know that I am in My Father, and you in Me, and I in you.
21 “He who has My commandments and keeps them is the one who loves Me; and he who loves Me will be loved by My Father, and I will love him and will disclose Myself to him.”
22 Judas (not Iscariot) said to Him, “Lord, what then has happened that You are going to disclose Yourself to us and not to the world?”
23 Jesus answered and said to him, “If anyone loves Me, he will keep My word; and My Father will love him, and We will come to him and make Our abode with him.
24 “He who does not love Me does not keep My words; and the word which you hear is not Mine, but the Father’s who sent Me.

Isaiah 55:10–11 (NASB95)
10 “For as the rain and the snow come down from heaven, And do not return there without watering the earth And making it bear and sprout, And furnishing seed to the sower and bread to the eater;  11 So will My word be which goes forth from My mouth; It will not return to Me empty, Without accomplishing what I desire, And without succeeding in the matter for which I sent it.

1 John 3:1-3 (NASB)
1 See how great a love the Father has bestowed on us, that we would be called children of God; and such we are. For this reason the world does not know us, because it did not know Him.
2 Beloved, now we are children of God, and it has not appeared as yet what we will be. We know that when He appears, we will be like Him, because we will see Him just as He is.
3 And everyone who has this hope fixed on Him purifies himself, just as He is pure.

1 Peter 1:23–25 (NASB95) The Logos!
23 for you have been born again not of seed which is perishable but imperishable, that is, through the living and enduring word of God.
24 For, “All flesh is like grass, And all its glory like the flower of grass. The grass withers, And the flower falls off,
25 But the word of the Lord endures forever.” And this is the word which was preached to you.

2 Peter 1:3–4 (NASB95)
3 seeing that His divine power has granted to us everything pertaining to life and godliness, through the true knowledge of Him who called us by His own glory and excellence.
4 For by these He has granted to us His precious and magnificent promises, so that by them you may become partakers of the divine nature, having escaped the corruption that is in the world by lust.

Proverbs 4:20–22 (NASB95)
20 My son, give attention to my words; Incline your ear to my sayings.
21 Do not let them depart from your sight; Keep them in the midst of your heart. 22 For they are life to those who find them And health to all their body.

Psalm 19:14 (NASB95)
14 Let the words of my mouth and the meditation of my heart Be acceptable in Your sight, O Lord, my rock and my Redeemer.

Eternal life is the amazing free gift of God in and is through His Son, Jesus!

Tagged as chapter 11, chapter eleven, school of salvation, sos, the scriptures, the word.